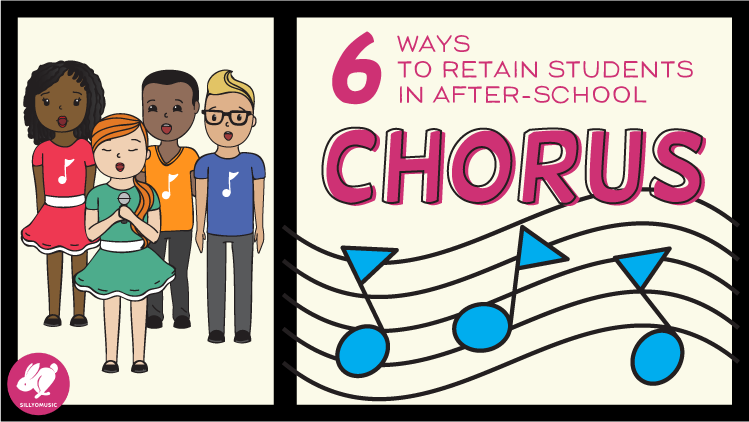 It is so frustrating to have students drop out of your after-school choral program mid-year. Reasons for dropping out range from students wanting to join other clubs, to parents taking away chorus as a punishment for poor grades. After loosing a chunk of my chorus to the soccer club during my first year at a new school, I knew I had to change some things.  EDIT: Anna Hanks has a great comment below about how she retained students by not having to compete with sports.  I totally agree. Kids, especially in elementary school, should be able to explore multiple interests!

1. Use concerts to recruit for next year.

My most dedicated group are always the 4th graders because they are so excited to be in chorus after watching the concerts when they were in 3rd grade. I chose at least one fun or memorable song for the winter concert and did a short musical in the spring with fun costumes, props, and choreography. One song I made memorable during a winter concert was “Santa Lucia.” I incorporated some Swedish traditions by turning off the lights in the auditorium and having the oldest girl enter with an electric candlelight wreath her head to an instrumental version of the song. The other singers followed her in line as the got into place. It really set the tone for the concert and the audience was silent! By the time the 4th graders were able to join chorus, they took it much more seriously than the group I had during my first year at the school.

2.  Give lots of solos and put kids in charge.

Even if it’s just a reading an introduction to a song, pulling the curtains, or holding a sign or prop, I tried to give each kid one special job or moment during the year. They take it seriously, and are so much better at remembering their tasks than I am. Even though something may feel like a chore to us, to a child, it makes them feel important. It’s also fun to see student leaders emerge in the group.

3.  Set aside time for games and play.

Dramatic exercises that focus on movement, concentration, ensemble connection, and improvisation are great. If it’s a beautiful day, or near the end of the year, I take students to the playground for 10-15 minutes while waiting for others to trickle-in after school.

I found lots of great dramatic exercises to use from theater books for kids and sometimes a classroom teacher would pop-in and play with us! A fantastic book full of imaginative activities is  On Stage: Theater Games and Activities for Kids by Lisa Bany-Winters. Here are two exercises I used.

4.  Provide snacks (or allow them to bring snacks from home).

I always provided snacks, and the kids looked forward to them. It was another way to show that I cared. To save money, I bought them in bulk and split up the snacks in coffee filters because they were cheaper than paper plates. See my short blog post here. Snacks I’ve provided include pretzels, popcorn, chips, cookies, and Cheez-Its. I usually mixed it up, for example, 7 honey pretzel twists and 2 cookies. In late spring, I’d even cut up a watermelon or give freeze pops to the kids while they played on the playground for a few minutes. We also had pizza on concert days. I knew some students would not have a ride to the evening concert, so even though it made my day very long, I always offered to play a movie and provide pizza for students that couldn’t go home before the concert. Remember to save your receipts for tax deductions!

Sometimes the best concert ideas would come from the students. I’ve had students go home and study The Temptations on their own, and create amazing choreography to some of the Motown songs we’ve sung for our Black History Month assemblies! The moves were so much better than what I would have come up with.  The school secretaries almost died when a group of boys performed a dance to Music K-8’s “My Pizza”, just for them, with the moves from the following YouTube video.

We had video announcements at our last school so it was fun to have chorus sing short songs for holidays. What was also great about that is that you can write out the lyrics and no one will see them if you hold them off-camera. 😉  Another idea is a school tour.  Take chorus students around to the primary classrooms and office staff to brighten their day! We also went to Six Flags every Spring to sing with other students in the county.  If students could not pay for their tickets, I would pay for them, or tell them to bring what they could. This was one of my BEST recruiting tools and students talked about it all year. I’ve also had a grant funded which helped defray costs for families.

I hope this post gave you a couple of useful ideas. Even though I take chorus very seriously, there were times when I really did have to lighten it up. Especially since it was after school and I did not want the kids to burn-out. Yes, this does require you to spend money (perhaps you could use school or PTA funds) but your chorus kids will become extremely loyal to you for going the extra mile.

Find What You Need

We use cookies on our website to give you the most relevant experience by remembering your preferences and repeat visits. By clicking “Accept All”, you consent to the use of ALL the cookies. However, you may visit "Cookie Settings" to provide a controlled consent. View terms here.
Cookie SettingsAccept All
Manage consent

This website uses cookies to improve your experience while you navigate through the website. Out of these, the cookies that are categorized as necessary are stored on your browser as they are essential for the working of basic functionalities of the website. We also use third-party cookies that help us analyze and understand how you use this website. These cookies will be stored in your browser only with your consent. You also have the option to opt-out of these cookies. But opting out of some of these cookies may affect your browsing experience.
Necessary Always Enabled
Necessary cookies are absolutely essential for the website to function properly. These cookies ensure basic functionalities and security features of the website, anonymously.
Functional
Functional cookies help to perform certain functionalities like sharing the content of the website on social media platforms, collect feedbacks, and other third-party features.
Performance
Performance cookies are used to understand and analyze the key performance indexes of the website which helps in delivering a better user experience for the visitors.
Analytics
Analytical cookies are used to understand how visitors interact with the website. These cookies help provide information on metrics the number of visitors, bounce rate, traffic source, etc.
Advertisement
Advertisement cookies are used to provide visitors with relevant ads and marketing campaigns. These cookies track visitors across websites and collect information to provide customized ads.
Others
Other uncategorized cookies are those that are being analyzed and have not been classified into a category as yet.
SAVE & ACCEPT